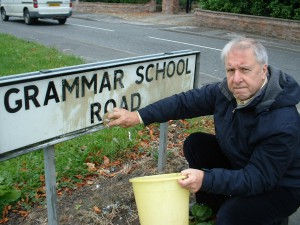 I was laughed at by the Labour Group at the last meeting of the Council in Warrington for being bothered about dirty signage in Lymm. They were much more concerned with passing political motions criticising the effect that cleaning up Labour’s economic mess is having on the vulnerable. The Lib Dems in the Coalition are doing their best to minimise the effect of welfare rationalisation on those in real need, so being told that we don’t care about the disabled doesn’t go down well with us, particularly when it comes from a party unwilling to say anything convincing or credible about what they would do if they won power or how they would pay for it.

So back to the signage. Anyone going around Lymm village cannot fail to be aware that there are a lot of signs that are damaged, worn out, covered in lichen or overgrown and difficult to read. Some signs are redundant, while other necessary signs are missing or wrong. Residents may believe, quite legitimately, that having paid their Council Tax the least they can expect is for signage to be maintained. Sadly with local government having suffered year on year cuts for most of the last decade, yes the Labour Government was cutting funding too, choices have to be made. Clean signage comes pretty close to the bottom of the pile for resources.

What can we do about that? Well I’ve chosen to clean some of the signs that I can get at safely. Some residents have already asked me what they can do. Most dirty signs only need a sponge or gentle scouring pad, some water and detergent and a few minutes of elbow grease to clean. Those with dried on lichen need a little more work and caravan cleaner has been suggested.

Safety is paramount, nobody should expose themselves to any danger. Don’t use ladders. Don’t touch any sign that has any exposed power cables (report those immediately to the Call Centre in Warrington on 01925 443322, drop me an email or leave a phone message on 01925 751817). Don’t clean signs that involve standing in the road. If you don’t want to do it yourself but a sign needs attention let me know.

Some signs, such as the GRAMMAR SCHOOL ROAD sign above have been vandalised and are harder to clean. This one took ages to clean, and still isn’t perfect, because it was “egged” some years ago. A moment’s thoughtless “fun” led to a dirty sign for years giving a poor impression of the road and the village to passers-by on the A56.

Lymm is generally a very well kept, and house-proud, village. This is why the street scene matters to residents. I will hold the Council to account for their responsibility for signs which need replacing or repairing and are beyond what the community can do for itself. Many of our damaged signs were vandalised or damaged in road traffic accidents where those responsible do not take blame for what they have done, leaving the community purse to pick up the costs. Wherever possible those who cause damage should be made to pay.

Another possibility, which we discussed with the Council some years ago, would be for the Parish Council to take control of the signage budget allocated by Warrington to Lymm and deal with signage locally. Signage is a policy area where a ‘one size fits all’ policy of equal neglect around the borough because of funding issues, may not suit individual communities. Such a devolved budget would be a proper approach to the localism agenda.

So for the time being I will clean signs, thank those who help, and report damaged signs to the Council. This is no one’s highest priority, not even mine, but it is a practical simple way to make life a little better for everyone in the village. Then we can start thinking about not dropping, or picking up, litter, but that’s another story.