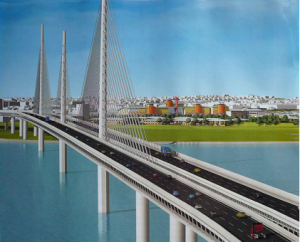 The North West requires substantial investment in a coherent transport infrastructure to become more competitive and become the “Northern Powerhouse”. Instead of further commitment to a Regional Growth Fund a series of disconnected vanity or token projects have become campaign issues in Warrington. The social and economic divide produced by the barriers of the Mersey and the Manchester Ship Canal need to be bridged both physically and metaphorically.

Yet, the national Labour Leadership, at a party rally in Warrington, have failed to commit to removing the tolls from the new Mersey Crossing for Warrington residents. A teacher who commutes to school in south Warrington expects the tolls to add more than £100 per month to his commuting costs.

“This is part of a pattern” says Bob Barr, Liberal Democrat Parliamentary Candidate for Warrington South. “By opting to finance the Mersey Crossing using the Private Finance Initiative the last Labour government went for the most expensive form of finance, for the most expensive new crossing of the Mersey possible, expecting drivers to pick up the costs through tolls. Insult has been added to injury by tolling the original Jubilee Bridge, this is the first time tolls have been introduced for an existing crossing in the last 100 years.

Labour has saddled this area with the hugely expensive Whiston Hospital Private Finance Initiative scheme, payments on which have threatened other hospitals in the area. This hospital, built by Labour, maximised the number of single bedded wards to allow private operations to take place.

Nearby the Fire Control centre at Lingley Mere stood empty for years, part of a Labour project that wasted £469m according to MPs and the National Audit Office.

HS2 remains hugely controversial, and again it was wildly over-specified for train speeds not yet feasible, or necessary, with a wasteful billion pound link to a proposed train works in Wigan.

Labour wants to be trusted with the economy, yet in our region they have privatised, overspent and under-delivered consistently saddling residents with the costs. Instead of delivering the infrastructure the North West badly needs to be competitive, Labour opted for wasteful privately financed vanity projects. When given the opportunity to put a little of this right by pledging the removal of tolls from this vital new crossing all they offer is a ‘future review’, a totally meaningless gesture.

What Warrington and the North West needs is a properly funded regional growth initiative to ensure that the infrastructure can sustain the economic development of the region, not a few expensive vanity projects.”